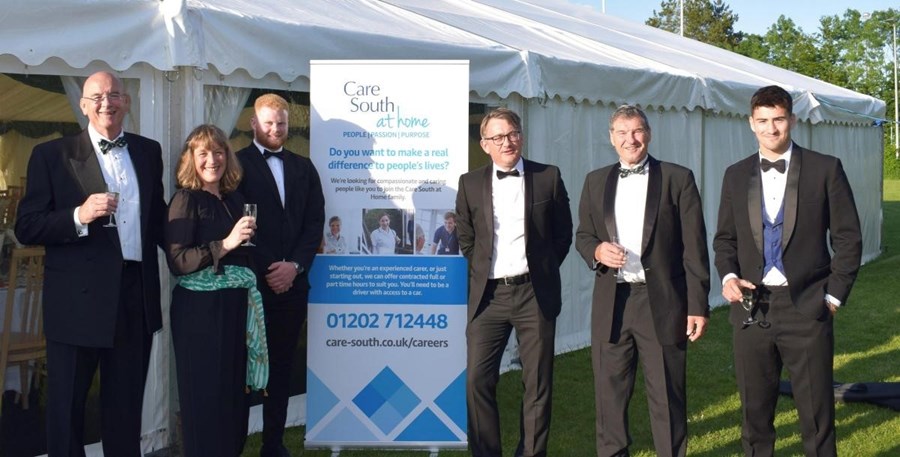 AS THE dust settled on the season for Dorchester Rugby Club, they celebrated their 150th anniversary in style by holding a black-tie ball in a marquee at Surcouf Park supported by Care South.

Joining the 170 strong members and friends of the club were guests of honour Orlando Bailey and John Stewart, both of Bath Rugby Club.

In what could be called a homecoming, both players started their rugby journey with Dorchester, and via Bath Academy have now both played in the Premiership outfit's first team.

Bailey has been a part of the senior England training squads and recently a part of the match day squad for the 52-21 defeat to the Barbarians.

Both players spoke of their journey through the game to the highest level in English club rugby and reminisced about their success whilst at Dorchester and credited Mike Sprules, Dorchester's Colts coach, as playing an important part in that journey.

Care South at Home director, Martin Ross, joined the celebration and welcomed the new link with the club.

He commented on how pleasing it was to start a community partnership with the club, and how they should be proud of providing a platform for over 300 young players each season to follow their dreams to emulate the young men and women who have gone on to play professionally in recent years and represent their respective countries at international levels.

Both club chairman Tony Foot and club president Bob Andrews were overjoyed with the turnout for the celebration and the £1,000 raised for the Ukraine appeal, which will be presented to UNICEF and the Red Cross.

Foot said: “What a wonderful evening we had celebrating our great club's 150th year at this fantastically-attended ball.

"It was great to see so many old friends. Special thanks must go to our home-grown Bath players Orlando Bailey and John Stewart who spoke as our guests of honour, graciously giving up their time to talk so eloquently about their experiences in the professional game and their journey to get there.

"We wish them both well at Bath next season and our congratulations to Orlando having been part of the England squad against the Barbarians.

"I must also thank all our generous sponsors who gave freely of either their time or money to support and run the event and especially to our main partner for the evening, Care South, whose generosity ensured we all had the confidence to put on such a great event.

"I am also delighted to say that as a result of the evening we are able to contribute our target of £1,000 to the Ukrainian Appeal.”

Bob Andrews further reflected: “The pioneers who started Dorchester Rugby Football Club in 1871 would not have believed their eyes if they had been able to join us at our 150th Anniversary Ball.

"The mixture of players, past and present, sponsors, supporters and guests alike, provided the perfect mix for an absolutely wonderful evening and a fitting tribute to all those unpaid volunteers over 150 years who made this celebration possible.

"The marquee, supplied by David and Amanda Britton of Western Marquees, the son and daughter-in-law of Mike Britton, better known simply as ‘GB’, one of our most colourful captains of the Gladiators XV, provided the perfect venue and reinforced the close ties that Dorchester Rugby Football Club enjoys with our community partners.

"I thank everyone who contributed to the organisation of this spectacular event. It would not have happened without their dedication, they can feel justifiably proud of the success that everyone enjoyed.

"I was absolutely delighted to see the commitment from the junior section’s under-16s, who acted as waiters on the night, and the very professional event photographer from the junior girls’ section, clearly demonstrating that whilst we have a junior and senior section, we are one club.

"I am confident the club is well set for the next 150 years and will continue to be a central and vibrant part of the wider community that we feel very much a part of.”