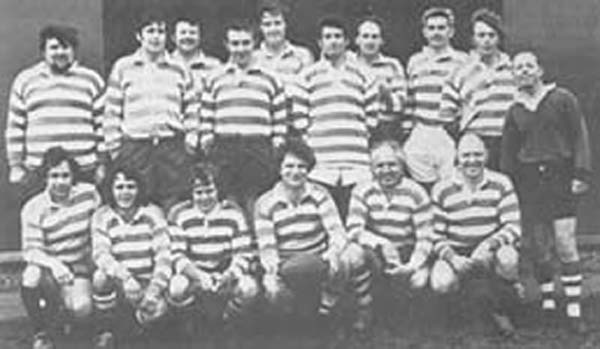 The following extracts have been taken from A History of the Dorchester Rugby Football Club (1984) by kind permission from the author Harry Brewer.

1870sRugby football was introduced to Dorset when Rev. C. T. Penrose, a master at that famous Warwickshire school, was appointed headmaster of Sherborne. It was not, however, until the early 1870s that many outside fixtures were played. There were many local variations of rule, and of course travel by any means other than rail was difficult. This decade saw clubs being founded all over the West Country and Dorchester was no exception.

1961-62The Gladiators had their first full season led by Harry Dowell. A number of young secondary modern school boys were blooded in these games. Bill Osmond, Maurice Cleaver, Brian Puckett and D. Read added the experience. Among the leading scorers were Elfet Mills (6 tries and a penalty), R. Dight (6 tries) and M. Blakeson (24 points), all with the boot.

1962-63David Joslin scored 7 tries for the Gladiators and was with M. King (26 points) their leading scorer. Harry Dowell was again in charge with Lacey, Cleaver, Osmond, Williams and R. Attryde his chief henchman.

1963-64Not a successful season for the Gladiators. 89 players appeared in their 24 matches, including a future President's son, Wilfred Weld.

1964-65The Gladiators had an extremely successful season under David Lacey. Their defeat of Castle Cary being most noteworthy. Mike Britton, Steve Roberts and John Sherry all began their long and distinguished careers by playing for this side.

1965-66The Gladiators had two famous away victories to their credit, Castle Cary and the R.A.F. Boscombe Down. In the former, the Author, who had turned up to run the touch, was pressed to play. Even at his advanced age he was pleased to take several strikes against the head. This was definitely his last appearance, (the first had been in 1946) and coincided with John Palmer's first. In the latter game, David Lacey was nearly on a kidnapping charge, having induced a North Dorset player, who should have been on the adjoining pitch, to take the field in a Dorchester shirt. The ploy, however, was spotted in time.

1967-68Mike Britton proved to be the Club's top try scorer, touching down 26 times for the Gladiators. Tony Davis (55) and G. Graham (41) shared the goal kicking and Mike Miller, the well known skittler, scored 9 tries and dropped a goal. This season Robert and Richard Acheson and Simon Meyers played their first games. All three were to play a notable part in the Club's affairs.

1968-69The Gladiators managed 8 wins, Mike Britton scoring 12 tries, twice as many as any other member of the Club. Gerry Bolshaw scored 55 points including 3 tries. Even in this side only Britton, Bolshaw, Osmond and Tomblin played with any regularity. A young David Imber played 3 matches.

1969-70The Gladiators had a disappointing season. Mike Britton was again scoring tries (13) and Stuart Jenkins scored 35 points in only 5 games.

1970-71For the Gladiators, Bolshaw again kicked his way to top points and included 4 tries for good measure. Britton, getting a little slower and dropping a few more passes, still managed to touchdown 9 times. The evergreen Bill O. played in 20 games as did J. West; even Hugh Diment put in an occasional casual appearance. Brian Dibben deserted his sheep on Bincombe Bumps to play twice and score 3 tries. A promising Colt, one Kevin Goodfellow, played in 1 game. It was alleged that the combined ages of the front row was 120. Mark Hardwicke in semi-retirement took over the captaincy and with Stafford re-appearing, a lively time was had both on and off the field. Their best win was against U. S. Salisbury Plain, 55-3.

1971-72Gerry Bolshaw headed the scoring for the Gladiators, kicking 49 points and scoring 5 tries. Mike Britton, back to form, scored 17 tries and only missed 1 game.

13 games were won including a 34-0 victory over Weymouth B. Doubles were achieved against Weymouth, Chard A, Wimborne B and Yeovil B. Osmond, Hill, Palmer and the ageless Tomblin were usually in attendance and were joined regularly by M. Frost, J. West and D. Briggs. Two, who were to become notable characters in years to come, joined the side; Ken Pitcher, a future Gladiators Captain and Cred Owen, a man capable of clearing a four-ale bar in 30 seconds flat.

1972-73For the Gladiators, Jerry Hill kicked 75 points, Mike Britton scored 16 tries and David Briggs 10. Many an exciting away journey was "enjoyed" in the Britton family charabanc.

1973-74The Gladiators never recovered from a disastrous first half of the season and only won 7 games. Britton again came up with 17 tries and John Swingler scored 7 in his 62 points for the season. Curtis, Ford, Finnigan and Jessop joined the usual old stagers as regular players this year.

1974-75The Gladiators had a better season winning 16 games. John Swingler, as Skipper, crowned his year by scoring 126 points (7 tries, 13 conversions and 24 penalty goals). Mike Britton touched down 8 times and Nick Barber and Steve Roberts 5. Johnny Stafford made yet another re-appearance playing in 20 games, joining other venerable veterans such as Ken Tomblin, Jerry Hill, Mike Thorne and Bill Osmond. Jeremy Hammick and M. Benjamin were newcomers who played often.

1975-76The Gladiators were the club's most successful side winning 13 of their games. John Swingler came up with 70 points including 6 tries. A newcomer, Nigel Wills, also scored 6. The Achesons dummied to 5 each in 3 games. Mike Britton chipped in with 4 as did P. Jenkins. Bill Osmond managed to survive 22 games and score a try! Mike Thorne and Steve Roberts played 20 times and S. Howden, B. Wilcox and ancients Tomblin and Stafford turned out frequently. The double was achieved over Yeovil B, Ellingham A and Tottonians A.

1976-77The Gladiators started the season with a bang, winning 9 of their first 13 games and the new captain, Brian Wilcox, could have accepted a record year. It was not to be, only 1 game out of 14 being won in the New Year. Very good victories were recorded over the B sides of Trowbridge (26-7), Eastleigh (37-0), Swanage & Wareham (26-4) and Bournemouth (24-0). However, severe defeats were suffered at the hands of Wimborne (6-44) and Poole (4-42). Wills added 34 points to his A XV tally. T. Nother and R. Galpin played in most of the games, the former missing one match only. Ken Tomblin played in 19 games as did Sharpe and Andy Goodfellow. Chris Bevan, who had joined the staff at Kingston Maurward, appeared 16 times.

1977-78The Gladiators had their worst ever season, winning only 4 games and conceding 612 points. The Skipper, Dave Rabson, was dogged by injuries and only managed a dozen games. Wills scored 33 points and Sharpe played in most games (22). The venerable Ken Tomblin played in 21. Who would have thought that he would have outlasted Bill Osmond, who only appeared twice. Timmy Bowden and D. Gray made their debuts and Leyland, Membury and Wilcox played fairly regularly. Although a bad season, the enthusiasm of the team was certainly not dampened.

1978-79Brian Eadie began his memorable five year stint as Captain of the Gladiators. Brian would tell those youngsters who would listen, how he had played for the Surrey Colts with Bob Hiller, round about the turn of the century and had partnered Starmer-Smith at half back. He was the ideal leader of the Gladiators, drawing on his long experience to blend the young with the old, bamboozle the referee, and win games otherwise lost, by sheer cunning. He also had the amazing ability to side step an on-rushing wing forward while apparently standing still. He scored 31 points during the season, only bettered by John Swingler's 62. S. Harden and M. Leyland scored 4 tries each.

10 games were won, the highest score being notched up against Old Oakmedians whom they beat 39-6. Steve Roberts, T. Beaglehole, M. Unwin, T. Nother, John Ward, Son of Bill and C. Wreford Brown played regularly and D. Gargrave and L. Surcouf appeared for the first time. Tom Prideaux, son of Freddie, also played in a dozen games, later he was to defect to Puddletown. Ken Tomblin played his last game, hanging up, at last, those famous quick striking boots.

1980-81By winning 21 games, the Gladiators had another excellent season and raised their record points to total 726. Nigel Wills had a personal best season scoring 240 points (10 tries, 64 conversions, 23 penalty goals and 1 drop goal) and with the 24 points he scored for the A XV he bettered Alan Price's total by 10. Another Gladiator record was created when they beat Ellingham A 90-0.

It was noted at a Committee meeting early in the year that Richard Acheson had become an international, having been selected for St. Lucia in their match with Barbados!

During the Easter holidays, Mike Thorne achieved his ambition of playing alongside his son Daniel, then aged 14. They both appeared in several late season games for the Gladiators. When Daniel was promoted to the A XV and his father was not, Mike decided it was time to hang up his boots!

1981-82The Gladiators had a good season, winning 17 games out of 25 and clocking up 599 points. Captain Brian Eadie, in what was to prove his last full season, kicked 35 points when the usual century maker, Wills, was unavailable. This year Nigel's bag was 113 (3 tries, 28 conversions and 15 penalty goals). Simon Meyers was top try scorer with 11, supported by Andrew (Seedy) Foot 7, Rob Acheson 6 and Sharpe and Moss 5 each.

Seventy-nine players appeared during the season and alongside the usual regulars, Steve Roberts and Roger Norman, were M. Newman, C. O'Gallagher and S. Partridge.

1982-83Brian Eadie, who has been missed both on the field and in the bar, resigned the captaincy of the Gladiators during the year, being posted away; Ken Pitcher stepped up to skipper the side to a very good season. They won 22 games and scored nearly 600 points. Nigel Wills, of course, led the way with 166 of them (2 tries, 28 conversions, 33 penalty goals and 1 drop goal). Ten tries were scored by Simon Meyers, 8 by Rob Acheson, 5 by John Ward and 4 each by Norman, Tilden, Weston and Jim Waterman (returning for 4 games). Among their best wins were Blandford A (56-0), Trowbridge B (37-0), Crewkerne (20-0) and Bournemouth Nomads (24-7).

1983-84Ken Pitcher's Gladiators again won 22 matches, Nigel Wills, a centurion again, scoring 142 points (1 try, 27 conversions, 27 penalty goals, 1 drop goal). He was presented with a special award at the A.G.M. to celebrate 1,000 points for the Club. Tony Brown at fly half scored 42 points including 3 tries. Other leading try scorers were Garrett, Manning and Sollis 6, Johnson, P. Legg and A. Goodfellow, 4, Boulter, Seedy Foot, Miller, Strain, Tomkins and Wilcox 3. The Double was achieved over Bridport A by 30-40 and 31-4. There were two huge away victories against Weymouth B (62-0) and Poole (40-0).