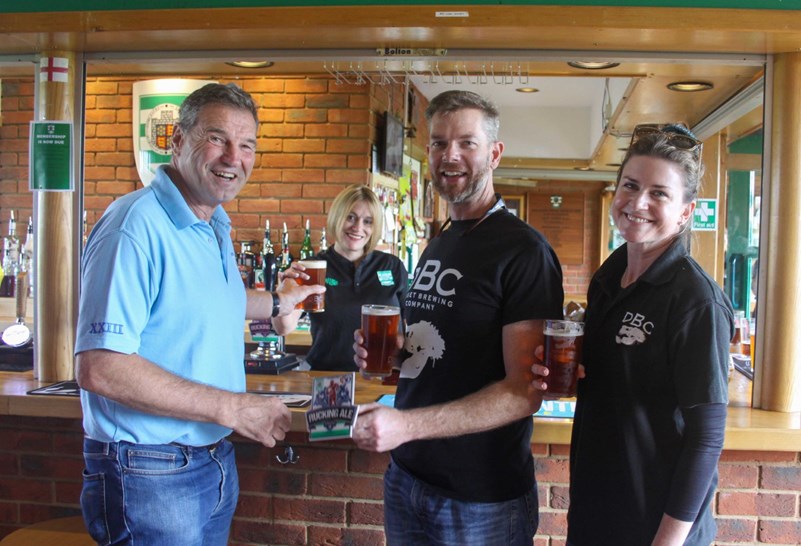 In a welcome collaboration, DBC have generously brewed “Rucking Ale” for Dorchester
Rugby Club. Nick Galton-Fenzi, Head Brewer, describes the Beer as “A light amber session
ale. Malty in character and a floral bouquet from a trio of hops, Cascade, Magnum and
Bobek. The beer finishes dry and hoppy with medium bitterness and character.” Many
former players who gathered last weekend to watch the 1 st XV pick up their first league win
of the season, used far fewer words to describe it, but were clearly fans of the new Ale with
clubhouse manager Michelle Rainford reporting 4 barrels used in one afternoon.
DBC are based locally at Crossways, having moved there in 2012 from their original home at
Weymouth Quay. The brewery founded by Giles Smeath in 1996, now brews over 1.5
million pints of ale a year for the residents of Dorset, supplying over 100 pubs with bottled
and cask ales.

The club hopes that sales of this local Ale will boost funds for the 150 th anniversary
fundraising campaign, culminating in a Summer Ball to be held in marquee on site in May.
Club Chairman Tony Foot is seen being presented with a “Rucking Ale” pump clip by Nick
Galton-Fenzi DBC’s head brewer, and Hannah Beveridge DBC’s Transport and Logistics
Manager. Dorchester Rugby Club’s Clubhouse Manager, Michelle Rainford, is seen handing
over the first pint before Saturday’s celebrations began.

The club will be hosting its annual family fireworks display on Friday November 5 th , where
those attending will be able to sample this unique pint.