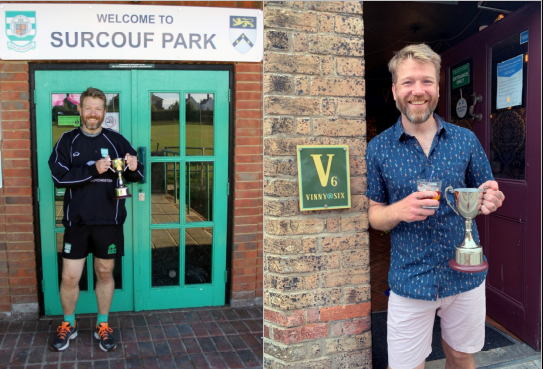 Dorchester rugby club has recently awarded a new trophy named in honour of club stalwart and former Gladiators captain, and indeed Gladiators tour legend, Brian Eadie. Brian’s family, led by his bother Len, came up with the idea to commemorate the popular ex player who passed away in 2019, and the trophy itself was donated by former club head coach Gary Knowles.

Club President Bob Andrews commented that the award recognised Tony’s value to Dorchester RFC as a true club man, going above and beyond to help when needed. Often playing for the Gladiators on a Friday evening and then being available on the bench for the first or second team as needed the next day. He has been instrumental in keeping Brian’s beloved Gladiators going and resulting in this season, albeit shortened, wining the Dorset & Wilts South Matrix 2.

Tony has actively encouraged and succeeded in bringing former players back to the club through his infectious enthusiasm and his desire to see the club grow.

In keeping with the spirit of the award Tony toasted Brian at the Vinny@6, who are one of the clubs sponsors, and they kindly provided drinks for a number of other senior Gladiators in the toast to its former Captain.

Congratulations Tony and good luck for the forthcoming season with the Gladiators, whenever that may be.